I was away at the European Geosciences Union last week presenting in a number of sessions. EGU has long been in Vienna which is a wonderfully cosmopolitan city with by far one of the best transit systems I have used. It works on an honour system and is just efficient and effective. The underground (U-banh) and buses get you anywhere quickly. It also has one of the highest number of hotel beds and apartments available for a major city making it is to stay in comfort.

Anyway, no EGU would be complete without a quick rundown of some of the extensive restaurants that are available throughout the city (and their TrustedReviews links):

Le Pho: specialising in pho (doh!), a Vietnamese soup. Freshly cooked and great price. Was a great start to the week. Yes, James had the large portion!

Pizzeria Osteria da Giovanni: a real backstreet underground cellar feel and a moderate wait for the pizza, but when it came…. O, mamma mia it was good!! Great prices again.

Universitatsbrauhaus: a piazza in the university quarter that is quiet and pleasant. Great Austrian/German cuisine.

Some really helpful cartography tips from staff writer Lisa Berry on 6 Easy Ways to Improve Your Maps. I particularly like point 2, Find Signal within the Noise, which is pertinent to any kind of exposition. What is your main point and highlight it…. demonstrate you signal.

Following on from my earlier post from Sense About Science, the government have now suspended implementation of the anti-lobbying clause for further consultation. Whilst not removed (yet), this is good news and allows researchers to set out a sensible case.

Historic England have just released Shadbolt’s iconic photos of England which went under the hammer last year and were rescued by HE (and, yes, for those confused Historic England was part of English Heritage which split in two in 2015).

These photos form the earliest aerial images of London and largely cover the suburban fringe that were undergoing rapid expansion - all in amazing detail. Sadly Shadbolt was killed in - perhaps unsurprisingly - a ballooning accident. A great collection that forms a unique part of early aerial photography.

The Beagle 2 was perhaps the most infamous of British attempts in space. The sheer audacity of a tiny mission, built on a shoestring to achieve a dramatic landing on Mars… that failed! it was subsequently found “intact” on the Martian surface using MRO data which is (at best) 30cm resolution (in a low orbit). This has now been reprocessed using multiple images and the so called Super-Resolution Restoration technique to produced imagery with an effective 5cm per pixel resolution to show the Beagle in even greater detail.

And, as suspected, rather than suffering the ignominious fate of impacting into the surface at very high speed, smashing in to a crumpled mess, it landed pretty much bang in the middle of its intended location, descending to the surface for a gentle touchdown. It looks like the “petals” with solar panels didn’t fully deploy which would have stopped the comms kicking in. One day we might know for sure… 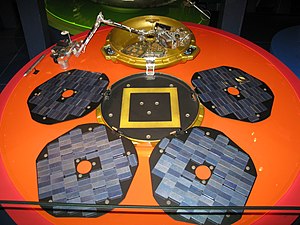 A small milestone with a paper from my PhD (Smith, M.J. and Clark, C.D. (2005) “Methods for the visualisation of digital elevation models for landform mapping.” Earth Surface Processes and Landforms, 30, 7, 885-900) hitting its century of citations - yes 100! Bringing flashbacks just looking at it again!!!

EPoD provided a great flashback last week to the first ever image acquired from TIROS 1 and, no joke, 1 April 1960. That is a LONG time ago and it was remarkable because it was the first time there was routine observation of the Earth’s weather. A remarkable achievement. It only lasted 77 days but this was a research mission testing feasibility and system designs. The TIROS programme was hugely successful and paved the way for Earth observation as we know it today. And if you want an extended flashback…. read the National Geographic article from that year. Great news from USGS over at LPDAAC announcing that ASTER data is now FREE OF CHARGE. A great data resource and invaluable to researchers around the globe.

On April 1, 2016, NASA's Land Processes Distributed Active Archive Center (LP DAAC) began distributing ASTER Level 1 Precision Terrain Corrected Registered At-Sensor Radiance (AST_L1T) data products over the entire globe at no charge. Global distribution of these data at no charge is a result of a policy change made by NASA and Japan.

More than 2.95 million scenes of archived data are now available for direct download through the LP DAAC Data Pool and for search and download through NASA’s Earthdata Search Client and also through USGS’ GloVis , and USGS’ EarthExplorer . New scenes will be added as they are acquired and archived.

ASTER is a partnership between NASA, Japan’s Ministry of Economy, Trade and Industry (METI), the National Institute of Advanced Industrial Science and Technology (AIST) in Japan, and Japan Space Systems (J-spacesystems).

Great news from Maps.Me developers. The slightly more minor news is that theyve gone much more granular for map data downloads - so now you don’t have to downloads 800Mb of data for the UK, but pick your regions. Much better.

The big news though is the ability to feedback map updates to the OpenStreetMap community directly through the app. Now that really is a brilliant way to improve PoI information. You can both add new points and edit point information.

Not only is Maps.me a great offline map app but you can now give back to the community.

Geography’s place in the world

A really interesting opinion piece over at The Times Higher Education Supplement on Geography’s place in the world. Four academics and four opinions on the what must be one of the most inter-disciplinary and diverse academic subjects: geography. Carl Lee/Danny Dorling (Oxford) take the traditional (?) view of geography being integrative and relevant to everything in society and that it is in a good state of health. Nick Clifford (King’s College) takes an opposing view of the dual split between physical and human geography opening up a gulf within the subject, this being increased as non-geographers are appointed to “subject specialist” positions within the domain. Jenny Pickerill (Sheffield) notes geography being the unifier and particularly within the context of the “environment”, addressing both physical and human geographical traits. Michael Goodchild (California) finishes with an about face and focus upon geographic information science. That is, a knowledge and understanding of how you spatially represent and model data. This is my subject specialism and it’s interesting he places this centre stage - the core of geography.

I think I am more included to take Nick Clifford’s view on this one - there is a duality in the subject and the appointment of non-geographers to departmental positions points to perhaps the subject’s biggest weakness. It isn’t subject specific - rather it is pan-academic. Much of what we study as geographers is covered (at least in part) in other subjects and in the US where there are very few geography departments you see these interests in a range of other departments. So perhaps Michael Goodchild’s observation about GI science gets to the nub of where we are at. Quantitative and qualitative approaches are both equally valid, but there needs to be a handling strategy to deal with them. And these other subject areas now realise that and are expanding into this niche. It’s not so much that geography is in decline, but rather the spatial knowledge is being subsumed back into the core disciplines, in much the same way they might use statistics. There is still a need for spatial research, but the focus will be on GI science and those graduates that understand that will be at a significant advantage.

GISGeography have some great “quick summaries” or quick sheets as I like to call them. They are short, focused, “explainers” usually with good use of graphics and links to other sites. Two have popped up recently with are worth a look-in:

1. GIS Programming Tutorials: covers all the main programming/scripting languages used in GIS (including R and SQL) with links to a range of websites, books and courses. Great starting point for anyone wanting to dive in.

2. Spectral Signature Cheatsheet: more specialised as it focuses upon remote sensing and spectral signatures of specific objects/surfaces using the USGS spectral library then goes on to talk about the use of the different main wavebands in satellite based remote sensing. Useful stuff.