My 6-year old daughter asked me this week why we have hot cross buns. Before I had a chance to look at Wikipedia and explain that they are symbolic of Jesus dying on the cross and are typically made without dairy products during Lent, she promptly informed me that Jesus died on a hot cross bun!!

If only all things in life were so simple!

I contacted a well known GI company this week, sending an email to what (obviously) was an alias. My expectation was that this would get routed through to the person dealing with queries related to this alias and respond appropriately. In response I received the following reply which, as you can see, notes that the person will be back from leave on 11 June 2007. A two-and-a-half month wait seemed a little on the extreme side!! Contacting someone else directly in the firm finally revealed that the alias actually forwarded to multiple addresses; no one had got around to answering the email and this particular person had their auto-responder on. Sometimes email is just a little too easy and you can really send out the wrong message to potential customers.

What do PIN and GIS have in common?

Definitely my favourite news story of the week, titled:

I don’t know who came up with the title, but its great!

As many have discovered, personal geodatabases in ArcMap 9.2 are not backwards compatable. Ho hum, thats nice and helpful. For those who use personal geodatabases this is causing quite some headache in terms of migration and mixed versions of software. 9.2 is not able to save in previous versions either, however the benefits it offers might well be worth using and include support for double precision and the new cartographic features (yes, you might actually be able to throw away those coverages). Spatially Adjusted briefly mentioned this problem late last year and have links to a blank/empty versions of personal geodatabases for 9.1 and 8.3 that can be used in 9.2 to store data in. A work around at least.

Toilets of the World 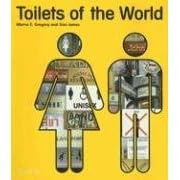 I saw this in my local bookshop and had to buy it. This obsession with toilet books harks back to 1997 and Adam Harts quite fantastic Thunder, Flush and Thomas Crapper: An Encycloopedia. Now out of print, it is a real classic and home to such anecdotes as a detailed explanation of the double-bend siphonic flush action. Anyone who reads this book must look at the item on “astronauts” and, my favourite, “australia”.

Anyway, a slight digression. Toilets of the World has, as might be expected, pictures (and explanations) of toilets from around the world. A great book to leave in the, well, toilet, and dip in to. El Porvenir airport’s toilet (Panama) is great. The Whiskey Cafe in Montreal, interesting….. and Rothesay Pier (Isle of Bute) is a real tribute to the Victorians (and one I have actually been to!).

Ed Parsons gave the heads up on the Google Maps blog news that support has finally been extended to GeoRSS. Bout time too in my books; GeoRSS is rapidly emerging as the de facto choice for lightweight distribution of vector data. And the fact that the OGC have a white paper on the “standard” is good news. Its not as rich as GML (or KML for that matter) but its good at its target market.

At the Journal of Maps we use WorldKit to suck the abstracts for our articles out of a GeoRSS file and display it on the main page. We’ve now add a Google Maps link for those wishing to use it. Having quickly played with it, support is not quite what I like, but its OK. Notice for example the different display of points and polygons; polygons also remain non-clickable whilst points are OK. I’m no expert on the Google Maps API so I’d been interested to see if some of these behaviours can be changed.

Ever wondered what a Raisz Half Ellipsoidal projection of the Earth look like? Well you do know because its shown on the right! The Map Room points to the Global Map Projector over at NASA which allows you to transform any equirectangular map image into another projection. Really is an easy (and fun!) way to explore the effects of different map projections. Also a very good way of generating bespoke world images for presentations; The Map Room suggests a visit to flatplanet to grab some JPG files from their vast archive of interesting world images to play with.

Well you would have thought so wouldn’t you? We have the following simple geometry:

So thats straightforward. OK, so if you want the basic properties you would expect your GIS to be able to calculate at least most of the “basic” properties “out of the box”. Lets take ArcGIS 9.1 as an example:

points: well it must be able to record the point otherwise you wouldn’t be able to see it. Can you get the coordinate? No.
lines: Ditto, so we can’t get the start/end points. Orientation. No. Length. Errrr. No.
polygon: Ditto for points again. Perimeter. No. Area (and, I might add, one of THE original reasons that a GIS preferred to manual calculations). Errr. No.

Well its not strictly correct. All of the above features can be extracted in ArcMap using some good ‘ole VBA code. Now thats nice and easy (not!). Some of them can be extracted using ArcToolBox. Ah, you need the underlying ARC/INFO and, more importantly, the more expensive license for it. The points can also be extracted by exporting in an ASCII format although, yes, you need ArcToolBox. What started all this off? A student asking if they could calculate area as surely that must be easy! No wonder there is an over-proliferation of add-ons like ET Tools, XTools Pro and Hawths Tools. I know ESRI can’t program everything; BUT REALLY. This is elementary geometry.

So am I getting increasingly frustrated with ESRI’s banal minimalist interface that fails to give you easy access to the fundamental underlying geometry? Yes. The now outdated and poorly designed interface that is littered with toolbars, many of which you have to pay for the functionality? Yes. The over-reliance on ArcToolBox to access functionality in the well documented and programmed ARC/INFO that they couldn’t be bothered/have time to re-write properly? Yes. The over-proliferation of tools in ArcToolBox under strange group headings, with different groups having the same tool name that does different things (e.g. Project, Buffer). Yes. The bungling in-out mentality with the GeoProcessing Wizard (in in 8.x, out but turn on-nable in 9.0, removed in 9.1 to be replaced with a pathetic help screen, in as a download in 9.2). Yes. Please make up your mind!! Either make the ArcToolBox tools easy to use or write the GeoProcessing Wizard properly.

Rant over and I no doubt stand to be corrected on several things!

A solar powered GPS data logger has been doing the rounds, from Vector One and Free GeoTools (who links to the specs page). This neat little GPS unit has a SIRFStarIII chipset (32 channel) with 8mb of memory. Its (of course!) solar powered, with a foldout LCD screen so that it can be used as a “standard” GPS or simply set to data logging. Its also BT enabled.

Given my previous review of the Sony CS1 I think we are going to see more devices in this form factor (partly because us NeoGeographers are collecting data not, navigating). It seems sensible for there to be a convergence in this area and the Keomo certainly seems to do that with solar, blue tooth, data logging, form factor and regular GPS functions. This is going to be in interesting area of development.