The only words to describe this are awe inspiring, spectacular, mesmerising - this is a visual tour de force that is matched by wonderful evocative music. Just the basic stats behind it say it all… completed over three months, 27 days of filming, traveling across 10 states, with 28,000 miles of driving and over 90,000 time-lapse frames. Produced to 4k this movie is simply begging to be viewed on a MASSIVE screen. Now if only my local cinema would show it as a short.

Time lapse to a beat

Utterly stunning timelapse from Julian Tryba of the New York skyline - just when you thought you had seen it all, this takes a giant leap into the future. This makes the landscape a pallette which you can draw upon and integrate into a piece of music. It is wonderful. Sit back, watch, marvel (and then go and read how he did it).

What the Victorians did for us

The Victorian era was the age of invention, although the discovery of photography just pre-dates this with Niépce’s famous View from the Window at Le Gras in 1826. His early collaboration with Louis Daguerre led to the announcement of the daguerreotype in 1839 and its subsequent commercialization, alongside Talbot’s calotype. These early photos now appear very rudimentary alongside their modern film and digital counterparts, however it never ceases to amaze me with the ability of these early pioneers to push the limits of possibility. I wanted to highlight how two of these continue to have had profound impact.

Our recent fascination with 3D will most likely have come from the movies through the use of polarised glasses, although some of us may well remember using filtered red/blue glasses to view a dinosaur or shark in a kid’s magazine. However an understanding of binocular vision and exploiting this to view images in 3D (stereoscopy) goes back to Sir Charles Wheatstone in 1833 with his invention of the stereoscope.

Whilst Wheatstone used pencil drawings for his stereoscope, photography was the obvious companion for it and was immensely popular with a Victorian society eager to consume new technologies. Photographers experimented with stereo through the 1840s, however it was the Great Exhibition in 1851 that was the catalyst for its exposure to an international audience. Brian May’s (yes, that Brian May!) sumptuously illustrated photobook is a prime example (May, B. and Vidal, E. (2009) A Village Lost and Found, Frances Lincoln), showcasing T.R. Williams’ wonderful stereophotos of an undisclosed village. The book identifies the village as Hinton Waldrist in Oxfordshire, rephotographs the same scenes and includes a stereoscope (designed by Brian May). Viewing examples such as this demonstrates that there is something magical about stereo vision - it’s a window on ‘a world that was’ and we view it as if we were actually there.

The second, and at the time, unrelated technology was aerial photography. Whilst we might think of this being inextricably linked with the invention of the aircraft and its rapid development in the First World War, there had been a range of creative methods for lofting a camera off the ground. The very first aerial photo was taken by Nadar in 1858 and whilst this hasn’t survived, James Black’s 1860 photo of Boston does. It may look a little passé now, however pause for a moment to consider what was involved. The 1850s saw the dominance of the collodion wet-plate process that produced a high quality negative on a glass plate. This had to be prepared on the spot as it was light sensitive only as long as it was wet and then needed to be developed straight after exposure. That meant Black had a full darkroom in his tethered balloon that was likely swaying 365m above the Boston streets. I don’t imagine there was a detailed risk assessment completed before the trip!

Probably the most successful alternative to balloons has been kites, with the first successful photo by Batut over Labruguiere, France, in 1888. However it is George Lawrence’s photos of San Francisco in the aftermath of the 1906 earthquake and fire that are astonishing (see below). He used up to 17 large kites to lift an enormous 22kg panoramic camera (my Nikon D700 with 70-200mm lens “only” weights 2.5kg!) with a 19” focal length and 20×48” plate. This was serious kite flying!

These Victorian inventions may seem distant now that stereoscopy is a key component in movie production, something movie-goers have become very familiar with. Aerial photography is equally important in map making and, when combined with stereoscopy, allow us to extract 3D features from the landscape. Kite photography is the direct ancestor of drones, a rapidly burgeoning area. Everything that was learnt about near-Earth imaging is now being re-learnt for a new generation. Just back from an afternoon at the Tour of Britain where Steve Cummings took the overall general classification. The route itself was 16 laps of a 3-point star centred on Trafalgar Square going out to Aldwych, down to Downing Street and then up Regent Street almost to Oxford Circus. We positioned ourselves just around from Aldwych on the Strand at St Mary le Strand. The road snakes slightly and almost all the riders come within centimetres (literally!) of the railing. It makes for a quite exhilarating position as the headwind from the peloton hits you, following by the incredible noise.

We moved to a couple of different positions over the course of the 16 laps and Ryan shot some hyperlapse (240fps high frame rate) on his iPhone. High frame rates are great fun with some models pushing 1000fps which is pretty amazing. Anyway, see the video below and watch the start carefully to see how fast they are really going!

For all you photography lovers out there, a great announcement from Google to say that the Nik Collection is to be made freely available. These are a great set of processing applications (and plugins for Lightroom) to process your imagery. Specifically Analog Efex Pro, Color Efex Pro, Silver Efex Pro, Viveza, HDR Efex Pro, Sharpener Pro and Dfine which basically deal with analogue special effects, colour correction, B&W processing, selective colour enhancement, HDR, sharpening and noise reduction respectively. My goto for nearly ALL my B&W processing is Silver Efex Pro. Really really powerful functions.

Nik’s applications put a focus on ease of use and accessibility, compatible with Photoshop, Lightroom and Aperture. The company was purchased by Google in 2012, and prior to that each program cost around $100 for a total of up to $500 for the software suite. Google opted to offer the whole bundle for $150, and made it available for all of its supported applications via a single installer.

My worry is that the Nik Collection might suffer the same fate as Snapseed which Google also bought. This is a wonderful Android application (also developed by Nik) which has been killed as a desktop application. We shall see…

It was a great honour this week to hear that my entry for the EGU 2016 Photo Contest (below) made the final cut. Just look at the past finalists to see the quality of the photos that are submitted.

Imaggeo which hosts all the photos is a worthy cause in and of itself (and the photo-contest was in-part started to promote this) as its “the open access geosciences image repositoryof the European Geosciences Union” and is part of their outreach in terms of science photography and highlighting all aspects of that visually. It grows year on year and is an invaluable resource. So I’m happy to use a Creative Commons license for my image.

The final vote is up to attendees at the conference (as per below)… so to anyone attending, go and see the photos as past experience shows you will get to see some great entries. AND VOTE!!

The finalist photographs are printed in large format and exhibited during the General Assembly. Each participant of the Assembly can then vote for up to three of their favourite exhibited photos using voting terminals set up next to the exhibition area. The public voting takes place from 8 am on Monday to midnight on Thursday. The votes are counted automatically and the three photographs with the highest number of votes are the winners. The winning photos are awarded during the lunch break on Friday. 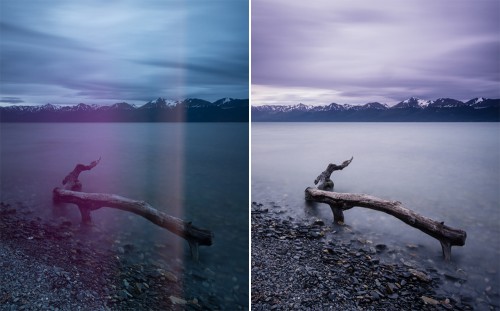 Note to self… Nikon Custom Banks

My Nikon D700 has what are called “Custom Banks” - on face value these look like ways of saving your settings (for example if you have a preferred setup for a type of shooting) which you can then use later. Indeed you can use them this way, except the way they are set up is somewhat counter intuitive (as Ken Rockwell explains)…. whenever you change a setting it is automatically stored in the current bank, there is no save option. So by all means use bank “B” for a studio portrait range of settings *but dont change anything* otherwise they are automatically stored! Given you can’t lock your settings, you’ll probably end up needing to check them which kind of negates the point of using a custom bank in the first place!

The newly released Pentax K3 II is a top end APS-C DSLR in a similar vein to the Canon 70D and Nikon D7200, with a BIG however….. Ricoh have introduced in-camera image stabilisation (like other manufacturers notably Olympus) which allows several degrees of movement on the sensor. As a result of this they have added what they call “Pixel Shift Resolution” mode. With the camera immobilised on a tripod and imaging a stationary subject, the sensor is moved by one pixel in each direction producing four images that are then merged back in to one pixel-shift image. Given that the sensor has a Bayer filter, the one pixel shift allows *full colour* information to be recorded for each and every pixel so removing the need for demosaicing (the the interpolation of RGB pixel values). It gives the benefit of no bayer filter yet with full colour (so detail should be similar to the Leica Monochrom). It also has the benefit of reducing noise as well.

So… you’re not going to use this on a UAV for capturing aerial imagery (which you could do with the Monochrom) but it could be very interesting for terrestrial capture of static objects.